Skip to content
Search
It's so nice to meet you!
Get to know Kay...

Almost every retail shop has its version of the Fair Isle sweater this winter, but today I’m sharing a fun “milkshake” hued Fair Isle sweater as I introduce a new-to-me retailer. I think you’re going to like this sweater, but I’m sure you’ll love Boden. 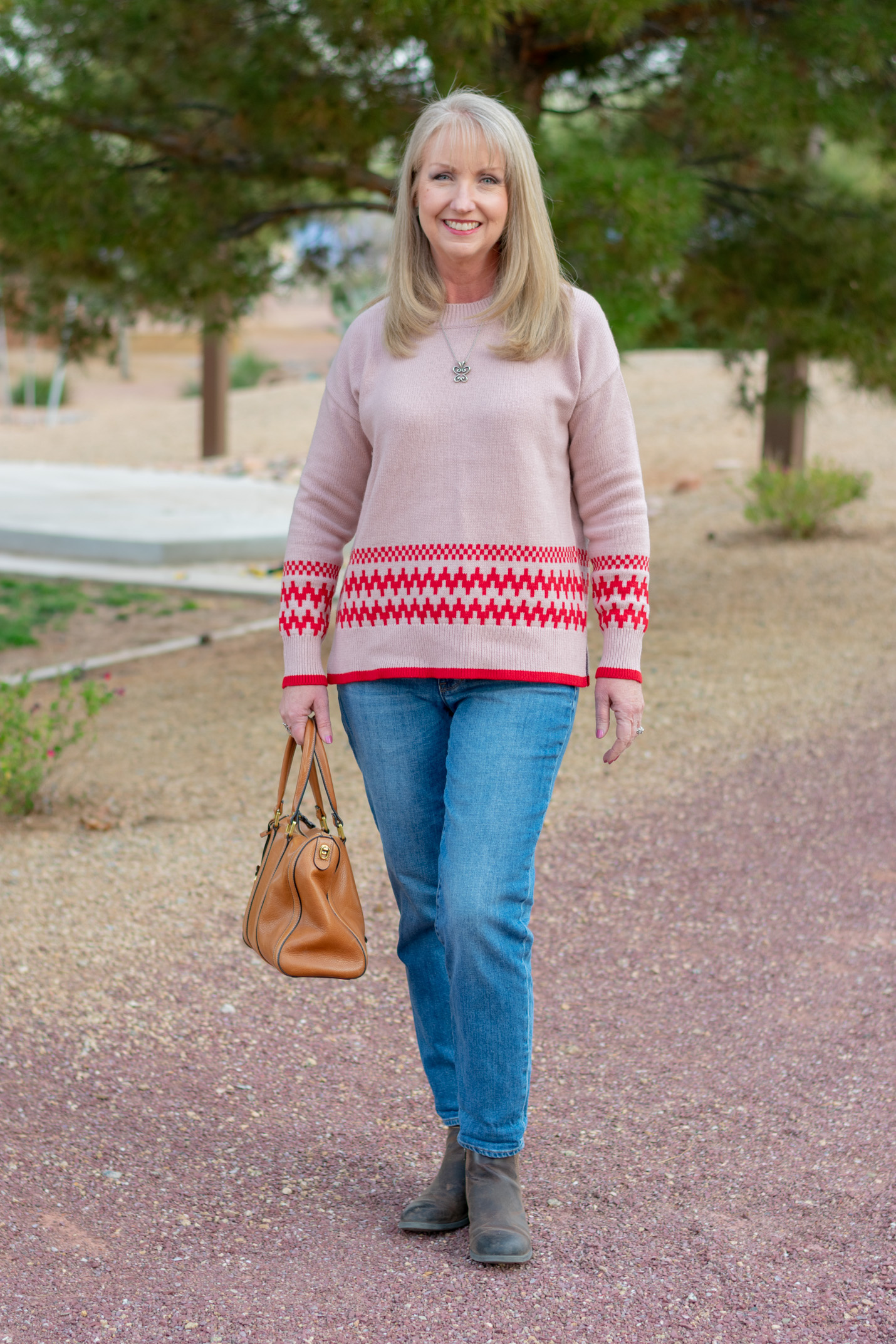 Boden is a British company birthed in London back in 1991, but it’s been distributing in the states since 2002. I’ve been admiring – ok, oggling – their clothing for several months now online. So when I finally placed an order for this sweater and a couple of other pieces recently, I could not wait to get my order! 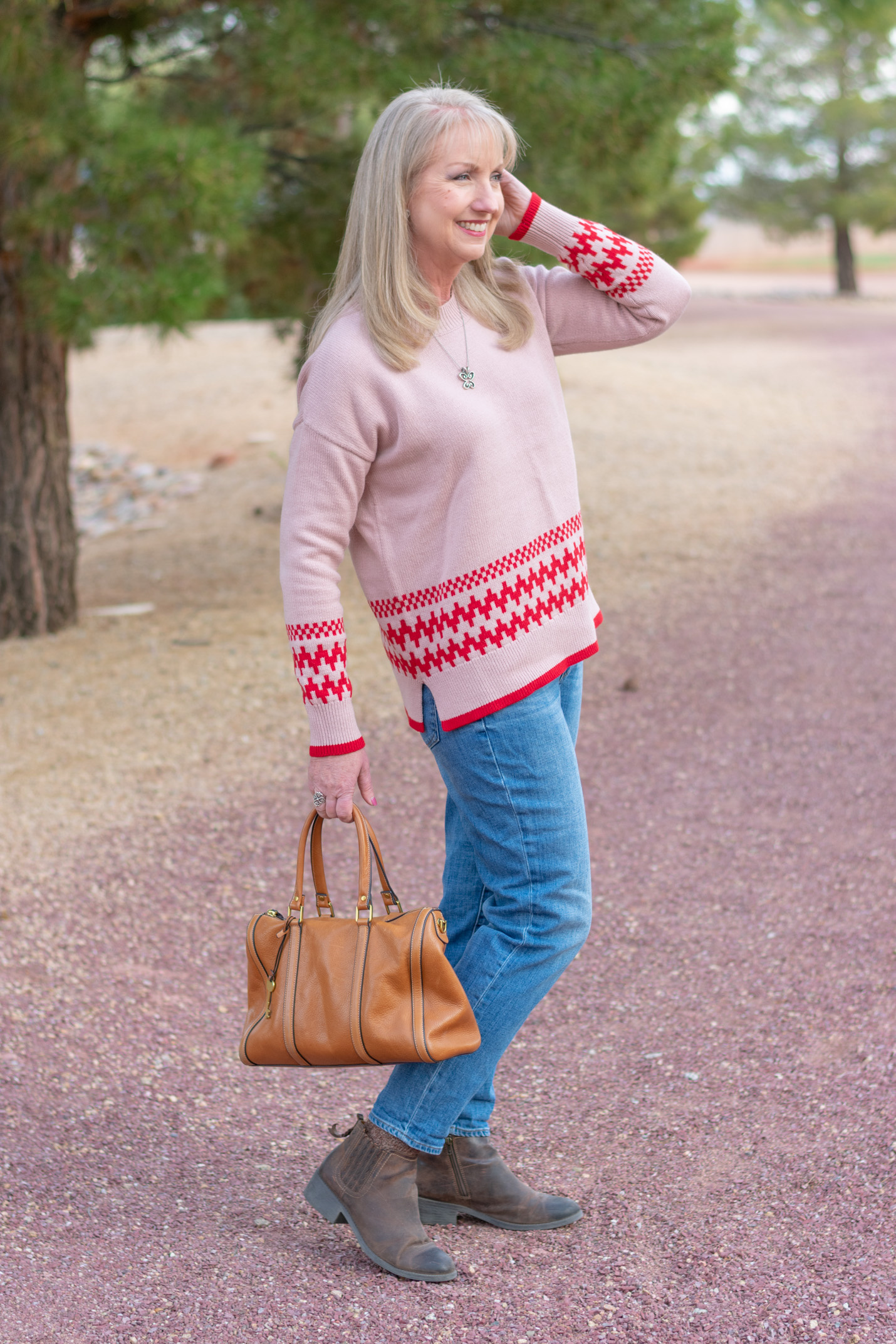 Boden’s goal is to bring colour to your wardrobe and fun to your life. And they proclaim that their sweet spot is their ability to merge fun and style. Ok. I’ll definitely buy that. But what I really like about Boden’s clothes is that they are truly classic with a colorful and fresh vibe. Think Duchess of Cambridge with a little more color than usual! 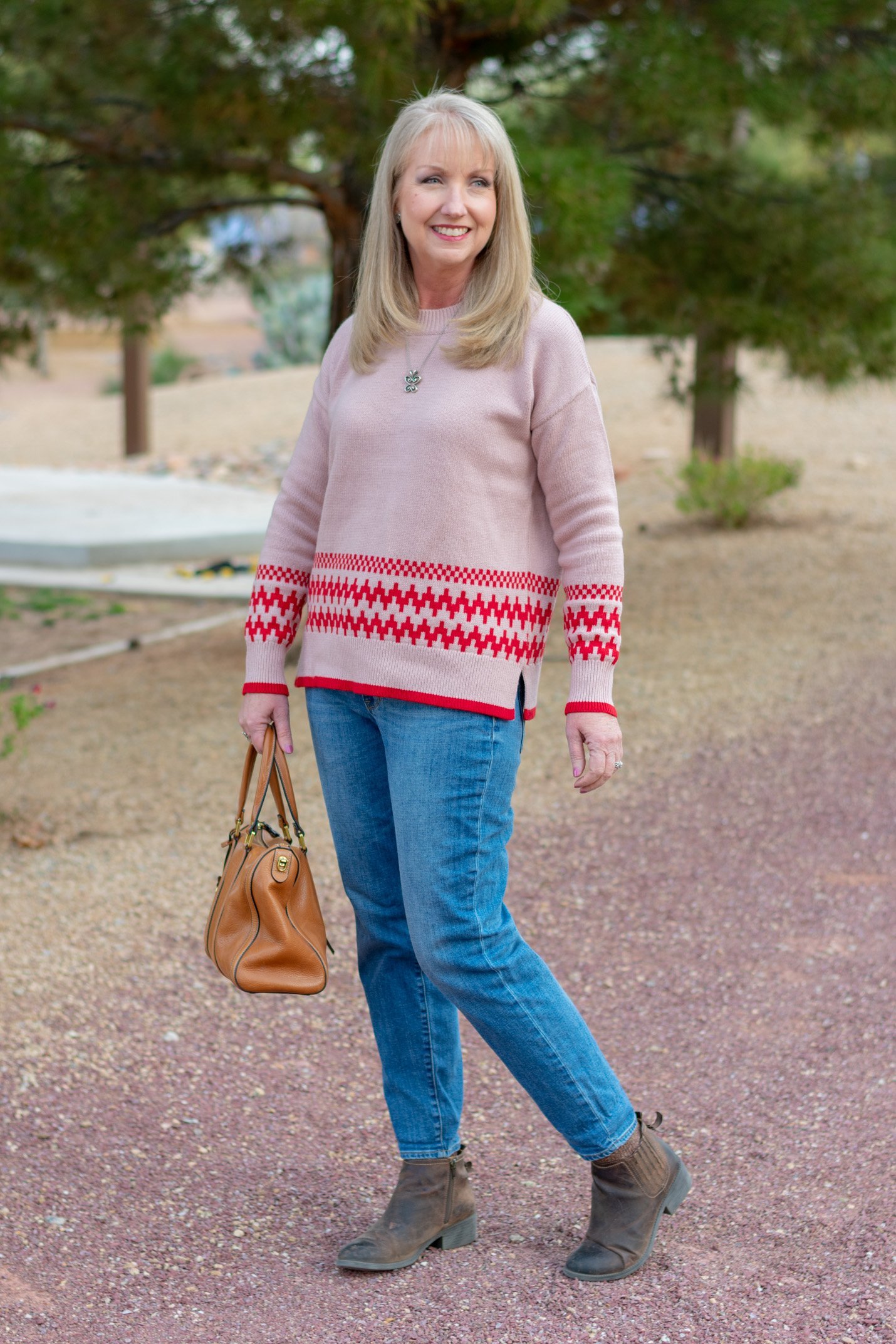 At Boden’s website you’ll find dresses with a modest cut and length, warm and colorful sweaters, classic skirts and elegant blouses and shirts. They carry a full line of women’s clothing, accessories and shoes. But Boden actually began as a men’s clothing supplier, so you’ll also find men’s wear and absolutely adorable children’s clothing. (Y’all! If you have young grandchildren, you have got to check out Boden’s selection of children’s clothing!) 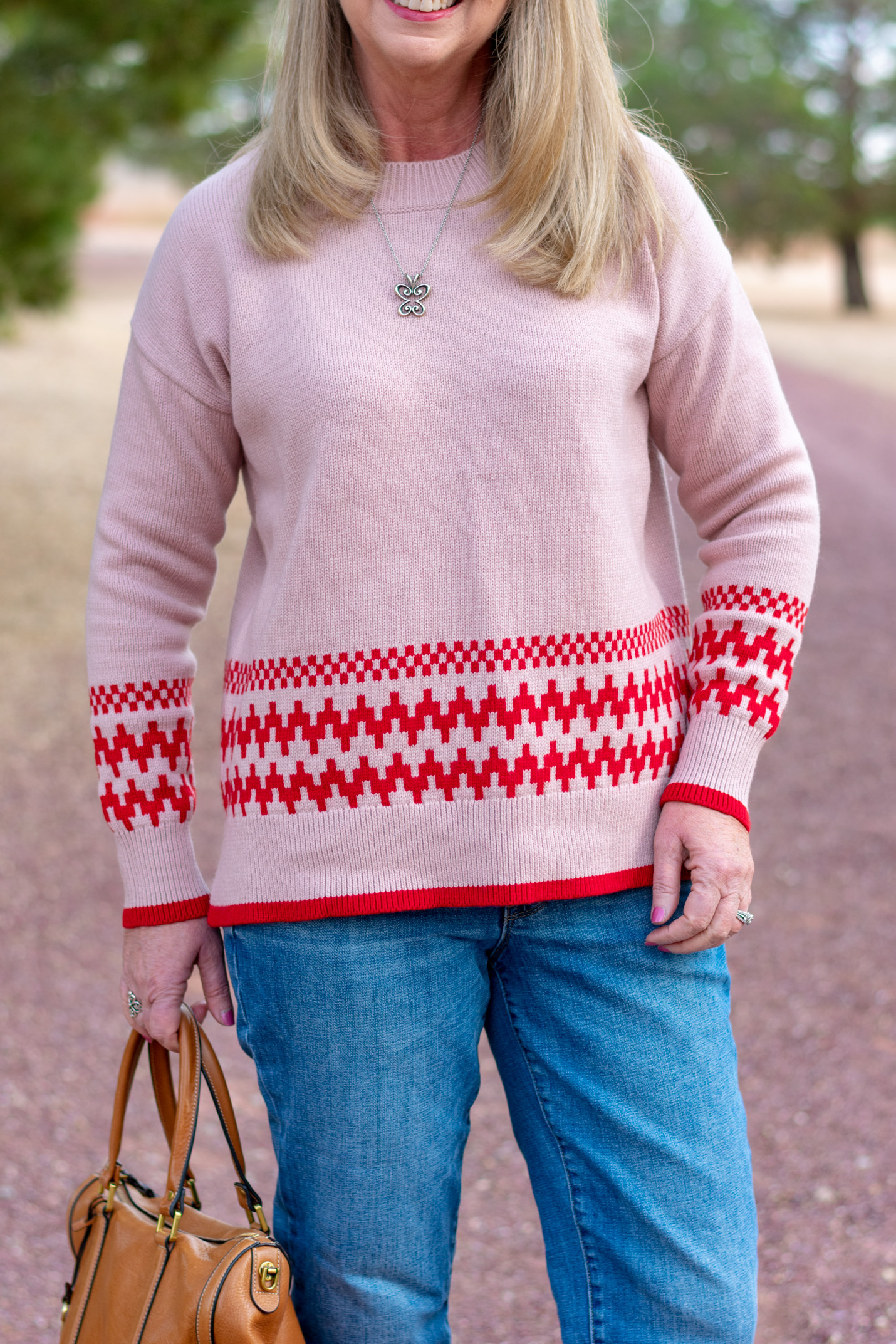 Unfortunately my Theodora Fair Isle sweater is a little large and I ended up returning it. But now I know that I need a small in sweaters at Boden. Yes, I ordered another one that I’ll show you in a week or so, and it was too large, too. But, hey! That’s what I’m here for…to help you know how sizes run at different stores. So far, Boden’s tops have run true to size, and the sweaters I’ve tried have been on the large side of normal. 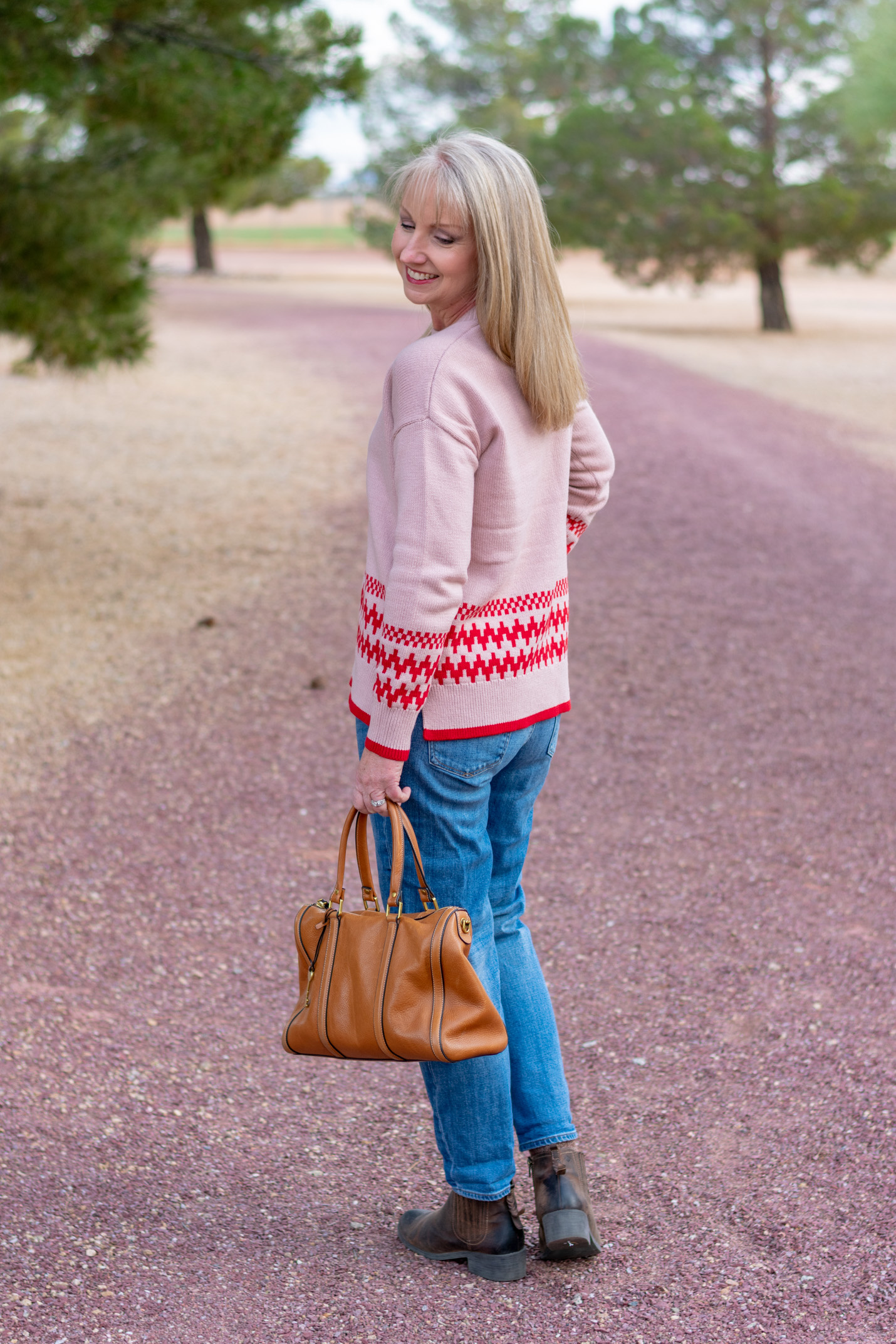 Also, I’d probably prefer this boxy, thick sweater with my skinny jeans. But for the sake of variety and because I know my readers don’t all wear skinny jeans, I paired the Theodora Fair Isle sweater, which also comes in a pretty soft grey melange, with my girlfriend jeans. Maybe if the sweater were smaller the outfit would look more proportional.

While I ended up returning this sweater, I do love the quality. This sweater and the other two I ordered arrived beautifully packaged and they didn’t disappoint. The fabrics are lush and the colors are vibrant and unique. I’ll definitely be placing another order.

And the good news is that this sweater, in this color, is currently 50% off. The bad news is that the inventory is diminishing. But, hey, there are plenty of other beautiful pieces of clothing marked down at Boden right now, too. Also, it’s available at Nordstrom, so you might find your size there. Mainly, I just encourage you to take a few minutes and look through Boden’s online catalog if you’re not familiar with them already. And maybe you’ll find a few things you want to try, too.

Also at Boden you can get free 3-6 day shipping with tracking on purchases over $49, and sometimes they offer free return shipping as well.

If you’re already familiar with Boden or you take the time to look through their catalog right now, let me know what you think. I’m going to add a few of my other favorites from Boden in the shopping widget below, too.

Blessed for My Day

Truly, God’s ways are not our ways. Can I get an “amen?” Have you ever gotten stuck in your treads because you just couldn’t see how moving forward could possibly work? Or maybe you’ve felt God calling you in a certain direction but just didn’t budge out of fear. I’ve certainly been there.

But let’s consider Mary and Joseph and the steps of faith they were called to take. They were young, inexperienced, confused and baffled by the callings they had received. And yes, we at least know that Joseph grappled the difficulty of what he’d been asked to do. But somehow they both obeyed. They both stepped out in faith, moved forward and walked into the unknown.

What do you think enabled Joseph to move forward with his engagement to Mary even though she was carrying a child that was not his? That’s what I want! I want whatever was in Joseph’s DNA that equipped him to say “yes” to God when most of us would have said “no.”

But when he had considered this, behold, an angel of the Lord appeared to him in a dream, saying, “Joseph, son of David, do not be afraid to take Mary as your wife; for the Child who has been conceived in her is of the Holy Spirit. She will bear a Son; and you shall call His name Jesus, for He will save His people from their sins.” ~ Matthew 1:20-21

This site uses Akismet to reduce spam. Learn how your comment data is processed.

7 Styling Details Essential to Every Outfit

Hello, and welcome to Dressed for My Day. My goal here is to help women…
Read The Post
Uncategorized

How I Really Dressed for My Day + Q&A w/ Kay

Happy Saturday! I hope you’re doing something today to enjoy the celebration of Jesus’ birth,…
Read The Post
Uncategorized

Hi gals, and happy Friyay! Do you have plans for celebrating the Reason for the…
Read The Post

Subscribe to get updates straight to your inbox!
@dressed_4_my_day